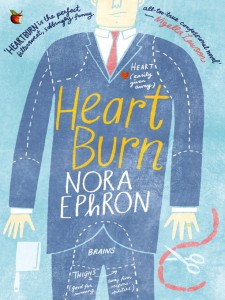 Show me a woman who cries when the trees lose their leaves in autumn and I’ll show you a real asshole.

Heartburn by Nora Ephron is about a cookbook writer’s divorce. Normally she writes cookbooks with memoir interspersed throughout, but for this occasion she has decided to do a flip-flop and write a memoir with recipes here and there.  The story contained a cast of pathetic upper class characters, which is always fun, and the writing was pretty funny in parts, but overall it left me pretty underwhelmed. Novels about divorce probably just aren’t my thing. I did find it a little more interesting after I read it was actually Ephron’s real memoir marketed as fiction. This also made me a little more sad, knowing that these characters were probably fairly accurate portrayals of real people. Because Ephron’s name is always popping up as an author people really dig I’ll probably give another novel a shot to try to figure this out, but I have my suspicions, based on this book, that she is definitely in the chick lit genre so further reading may not happen any time soon.

If there’s one thing we know about God, it’s that he’s not named Mel.